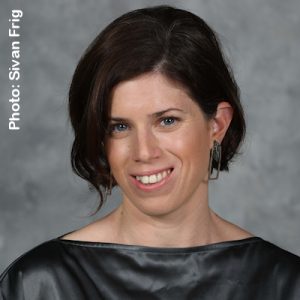 Session: Learn about the modern day liberators of the Western Wall, Judaism’s holy site.
In the session we will learn about Women of the Wall’s 34 years of struggle towards equality in Israel, and the connections to state and religion issues in Israel and the discrimination against women in public spheres.

Bio: Yochi was born in Safed and raised in the Orthodox environment.
Served IDF as a commander in the Nativ Military Course – teaching Judaism and Zionism to new immigrants and non-Jewish soldiers.
Following her military service, Yochi studied Political Science and Middle Eastern Studies at Bar Ilan University.
Yochi joined Women of the Wall in 2016 as Director of Education and Community Outreach and in 2019, was appointed Executive Director of the organization.
Yochi’s identity as an Orthodox woman and feminist shows that a woman may indeed possess both attributes. Married and the mother of 2 girls, Yochi strives to make Jerusalem and Israel more tolerant places for her daughter’s generation and beyond.